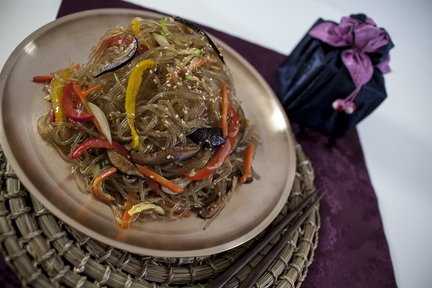 Step 1 – Cooking the Noodles:
1- Boil water in a sauce pan.
2- Place the Dangmyeon noodles in the boiling water and cook for 11 minutes over medium-high heat.
3- When done, drain from the water and place in a bowl. Drizzle some vegetable oil on top for the noodles not to sti
Note: If you dont have Dangmyeon noodles you can use Chinese glass noodles. Just place them in a bowl filled with boiling water and let them sit for 5 minutes until soft.

Step 3 – Preparing the Marinade:
1- In a bowl mix: the soy sauce, brown sugar, black pepper, sesame oil, grated garlic.
2- Slice the mushrooms and place them in the marinade while preparing the rest of the recipe.

Step 5 – Final Steps:
1- Place the cooked noodles in large pan over medium heat and add a little bit of the soy sauce marinade (used to marinate the mushrooms). Mix well.
2- Add the vegetables over the noodles. Mix well. You may have to use your hands to made sure all these ingredients are well integrated.
3- Sprinkle some toasted sesase seeds and mix with the noodles and vegetables.
4- Add the soy sauce marinade to the noodles and vegetables to your taste.
5- Serve immediately hot, or warm, or cold.
Bon appetit!