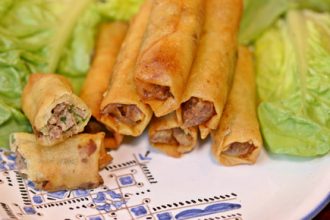 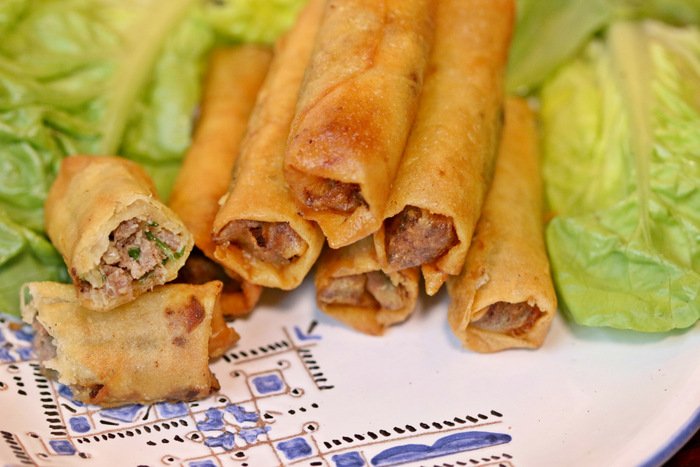 1- On a flat work surface, cut the warka (or phyllo) sheets into half-circles or squares. 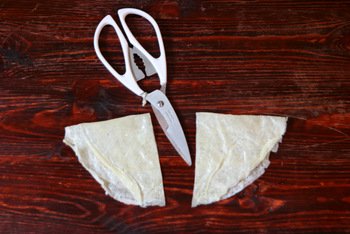 2- Take a sheet and place about a tablespoon of the filling onto the straight edge closest to you, leaving about 0.5 cm (1/4-inch) border along the sides. 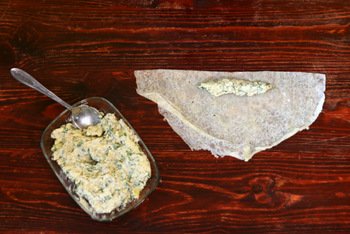 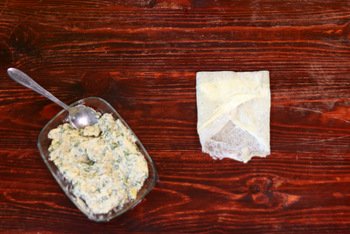 5- Roll up the edge tightly, as if you were rolling a carpet. 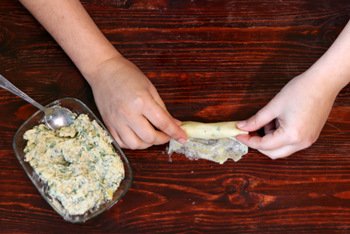 6- Brush the tip with a little bit of egg yolk to secure the cigar.

1- On a flat work surface, fold the circular warka into two to create a half circle. Cut the warka edges to even them out. 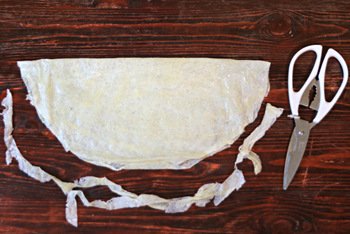 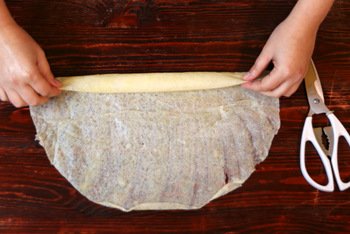 3- Cut the warka roll into 3-5 pieces, 5 cm (2-inch) wide, depending on the size of the triangle you would like to create. 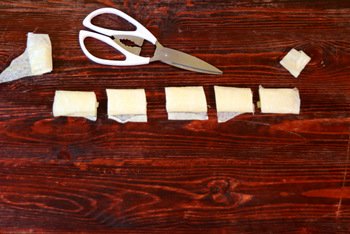 4- Roll out the warka strips. If you are using phyllo, just cut into strips directly without rolling it, otherwise, it would break. 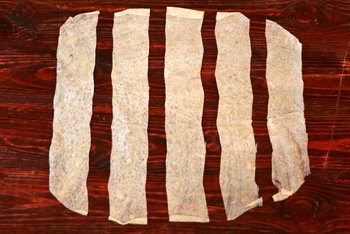 5- Take a strip and place about a tablespoon of the filling onto the edge closest to you. 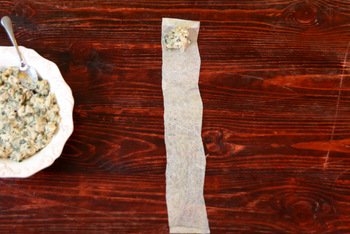 6- Fold the bottom left corner (closest to you) of the warka over the filling, aligning it with the right edge of the strip to create a triangle. 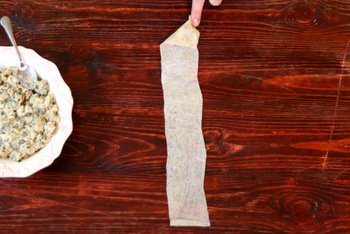 7- Now flip the bottom right corner upwards and align it with the left edge of the strip. Continue folding this way, left and right, while maintaining the triangular shape, until you reach the end of the warka strip. 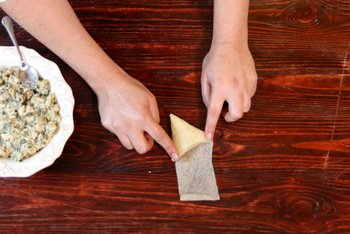 8- Brush the end of the strip with a little bit of egg yolk to secure the triangle. 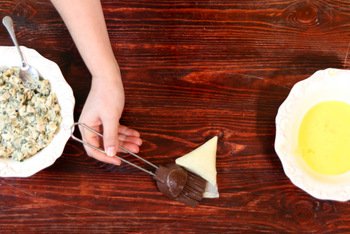 9- Cut the any leftover tip with scissors to even the triangle edge.

Forming Mini-Pastilla
1- Take a small round deep ramequin and place 2 overlapping small round warka inside, the edges of the warkas should be overflowing from the ramequin. 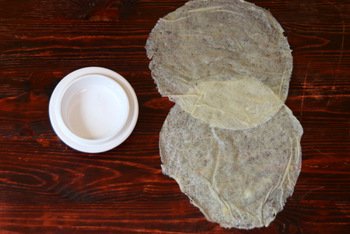 2- Fill the ramequin (warka) with the filling. 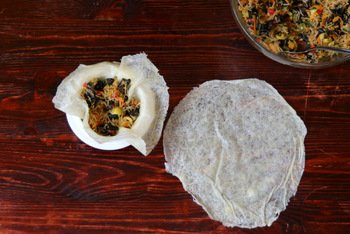 3- Bring the edges of the warka to the center and close them over the ramequin. Brush the edges with the egg so that they stick together. 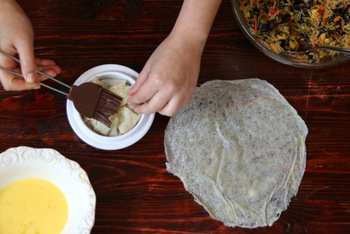 4- Place a thrid warka on top of the ramequin. 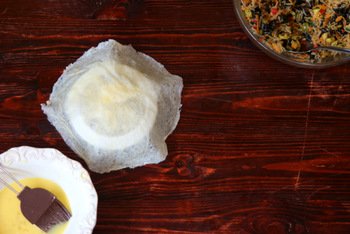 5- Flip the ramequin and remove it carefully. 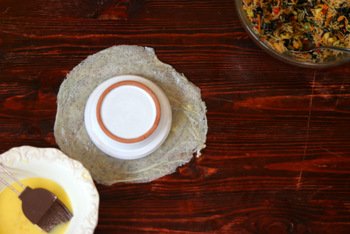 6- Brush the edges of the warka on the table with egg yolk. 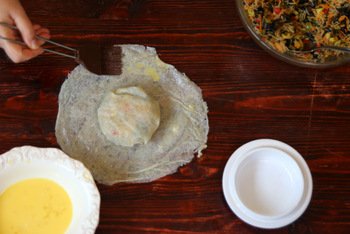 7- Bring the edges of the warka on the table to the center of the pocket. 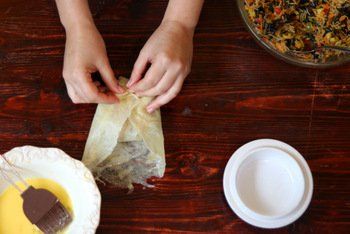 8- Gather the edges on the top. 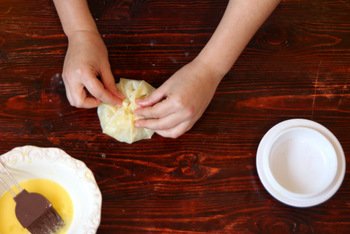 9- Brush the edges with the egg yolk so that they stick together.

Step 2: Cooking the Briwat
Frying Method:
1- Heat the vegetable oil in a deep pan. Once hot, start frying the rolls or briwat from all sides until they become golden brown. 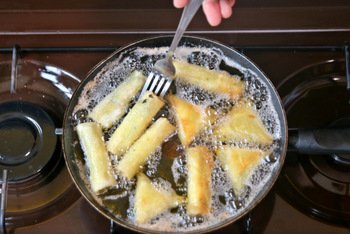 2- Once done, remove the rolls or briwat from the oil and place them in a plate covered with paper towel to absorb all excess oil.
Serve immediately! 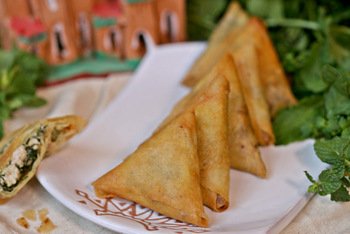 Baking Method:
1- Brush the rolls or briwat with melted butter and bake them in a preheated oven (180 C / 350 F) until they become deep golden brown. Serve immediately! 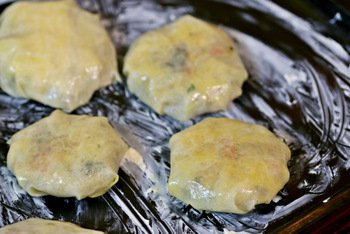 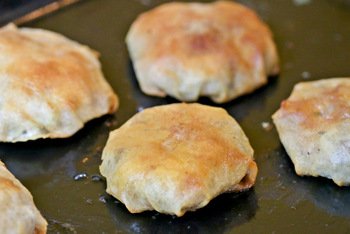 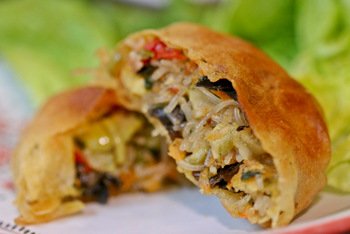