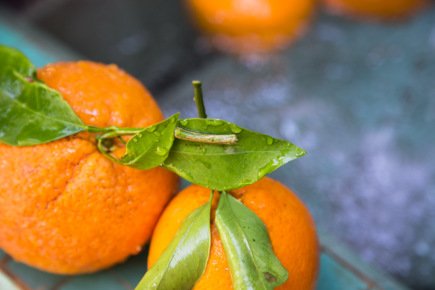 Step 1: Cook the Meat:
1- Finely chop the onion.
2- Heat a tagine over medium heat then add the chopped onion, the meat, and the vegetable oil.
3- Sprinkle the meat with salt, ground pepper, ras el hanout, ground cinnamon, ground ginger, turmeric, then add the cinnamon sticks and saffron threads.
4- Add the butter and orange juice, then mix well. Cook for few minutes until the onion start caramelizing.
5- Add the water and cover the tagine. Let the meat cook.
6- Ounce cook, add the sugar.

Step 2: Prepare the oranges:
6- Zest 2 oranges and cut each into four pieces, then remove some of the core.
7- Put the orange pieces in a pan and cover with cold water, bring the water to a boiling point and let the oranges cook for 15 minutes.
8- Drain the oranges from water, then add the cinnamon stick, cloves, and sugar.
9- Cover with 250ml water and let it simmer again for about 1 hour to 1 hour and a half, until the oranges have caramelized.
10- Turn off the heat and let the cooked oranges cool down.
11- Meanwhile, peel a fresh orange and cut it nicely between the membranes, then remove the orange segment.
12- Pour the orange syrup from the caramelized oranges over the orange slices.

Step 3: Serve the Tajine
13- To serve the tagine, first plate the meat, add to it the caramelized oranges, the fresh orange segments, and finish with a sprinkle of sesame seeds on top of the oranges.
Serve immediately with crusty bread. Hmmm… delicious.
Bon appetit!