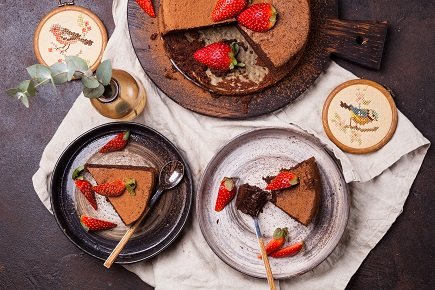 Step 1: Prepare the Ingredients
1- Chop the chocolate and place it in a large bowl with the butter. Melt the chocolate with the butter, either in the microwave in 30 second shots while mixing in between or in a bain-marie over boiling water. Once completely melted, let the chocolate mixture sit on your kitchen counter to cool down a bit while preparing the rest of the recipe.
2- In 2 different large bowls, separate the egg yolks from the egg whites.
3- Add 40 grams of sugar and the vanilla sugar to the egg yolks and beat with an electric beater for around 5 minutes until you get a thick whitish mixture.
4- Clean your egg beater before using it to mix the egg whites. Note that the egg whites should have NO traces of egg yolks, otherwise, they will not fluff.
5- Add a pinch of salt to the egg whites, and beat at high speed. When a thick white foam forms, add 100 grams of sugar little by little, while continuing to whip the egg whites. Beat the egg whites until white stiff peaks form.

Step 2: Mix the Ingredients
1- Add a little bit of the melted chocolate and butter into the egg yolk mixture and mix with a spatula. The goal is to raise the temperature of the egg yolk mixture by adding the warm chocolate step by step, otherwise, if the chocolate mixture is added all at once, the egg yolks would cook. Continue adding and mixing continuously until you get a thick smooth chocolate cream.
2- Now fold in the egg whites to the chocolate mixture, little by little. Using a spatula, mix gently in circular movements, from top to bottom, then cutting across with the spatula to keep the mixture fluffy.

Step 3: Bake the Cake
1- Butter a medium circular pan and cover with parchment paper. Pour the chocolate mixture in the baking pan and bake in a preheated oven at 180 C / 360 F for around 20-30 minutes. To check if the cake is ready, gently touch the center of the cake with your fingers, it should feel firm and springy.
2- Remove the cake from the oven and let cool down completely before removing from the pan.
3- Dust with unsweetened cocoa powder and serve the cake at room temperature.