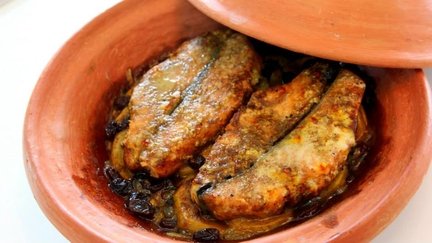 Step 1: Preparing the Marinade
1- First, we are going to prepare the marinade. In a large bowl, add freshly squeezed lemon juice, olive oil, honey, and Ras-El-Hanout – a staple Moroccan spice blend! Combine together.
2- Now add a large pinch of saffron threads, that you crush between your fingers, salt, and pepper.
3- Add a little bit of water and mix well. Our marinade is ready!
4- Place the fillets in the marinade, cover the bowl with a plastic wrap, and marinate the salmon in the fridge for at least one hour.

Step 2: Cooking the Potatoes First
1- Once you are ready to cook the Salmon, let’s prepare the rest of the ingredients.
2- Peel, cut, and thinly slice the onion. Peel the sweet potatoes and thinly slice them as well.
3- I am using a tagine, the famous Moroccan clay pot used for slow cooking. If you don’t have one, you can use a regular cooking pot.
4- Drizzle some olive oil in the bottom part of the tagine, add the onions, a pinch of salt, and a few branches of fresh cilantro.
5- Place the tagine on low heat, cover, and let cook for around 5 minutes or until the onion slices start sweating a bit.
6- Notice that I am using a plain clay tagine – if yours is decorated and colorful, then it’s not for cooking just for presentation!
7- Once the onion slices start sweating, it’s time to add the sweet potatoes. Remove the Salmon pieces from the marinade and reserve. Dip the sweet potato slices into the marinade before placing them in the tagine. Then pour the marinade over the potatoes and onion.
8- Cover the tagine and continue cooking for around 30-45 minutes on low heat, until the potatoes start becoming soft.

Step 3: Cooking the Salmon
1- Now add the salmon pieces on top of the potato slices and a final touch, add the raisins around.
2- Cover your tagine and let cook for 1 hour on low heat.
3- Cooking in a tagine is all about slow cooking, and don’t worry, the salmon will not be overcooked it will be just perfect! And that’s the magic of a tagine pot… However, remember, it has to cook on low heat; otherwise, you will burn the bottom layer of the ingredients.
4- From time to time, check on the ingredients, tilt the tagine and pour some of the sauce on top of the salmon and potatoes.
5- And that’s it, don’t move anything, don’t add anything… just wait until the potatoes are cooked and become soft… then serve hot! Look at this deliciously cooked to perfection salmon with sweet potato, raisins, in a honey spiced sauce… all you need is some crusty bread!