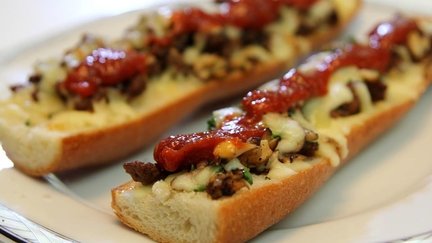 Step1 – Preparing the Meat (Kefta) and Mushrooms
1. Place the ground meat in a large bowl.
2. Add the spices to the meat (paprika, ground cumin, ground cinnamon, salt, and hot chili pepper).
3. Add the finely chopped cilantro to the meat (leave a little bit of chopped cilantro as a topping).
4. Using your hand, mix the meat with the spices and herbs until well incorporated.
5. If you have time, cover the bowl with a plastic wrap, and place it in the fridge for 30 minutes – otherwise, just cook the meat right away.
6. Chop the mushrooms into small pieces.
Step2 – Cooking the Meat and Mushrooms
1. In a large pan, drizzle 3 tablespoons of olive oil, and heat for 30 seconds on medium-high heat.
2. Add the meat, and cook for 4-5 minutes. Use a wooden spoon to break the meat into small chunks while it’s cooking. Keep stirring the meat the entire time it is cooking. The meat is ready when it changes color to a nice brown. Do not overcook the meat or it’s going to be dry.
3. Remove the meat from the pan and reserve.
4. In the same pan that used to cook the meat add 1 tablespoon of olive oil and the mushrooms.
5. Cook for a minute then add 1 tablespoon of water to the mushrooms, salt, and pepper to taste. 6- Cook the mushrooms for 3-4 minutes until they become soft.
Step3 – Making the Zapiekanka
1. Cut the French baguette in half, then cut again in half horizontally, to yield 4 pieces.
2. Layer the cooked meat, mushrooms, a little bit of chopped cilantro, and cheese on each bread slice.
3. Place the bread slices in a hot oven, and bake for 5-10 minutes until the cheese has melted.
Step4 – Final steps
1. To make the spicy ketchup, mix regular ketchup with the harissa. You can also just buy spicy ketchup from the store.
2. Once the Zpiekanka is ready, remove from the oven, and drizzle the spicy ketchup on top. Serve immediately! Bon Appetit!