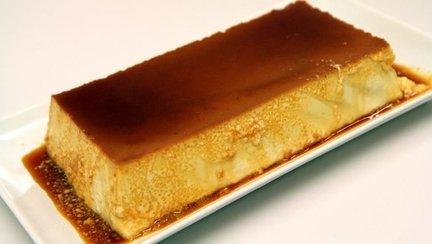 Step 1: Making the Flan Mixture
1- First we need 5 whole eggs. Use organic eggs if you can. Place the eggs in a blender.
2- Add vanilla extract. You can use any extract you like.
3- Add the zest of 1 orange and a pinch of salt. Whenever you make a dessert, anything sweet, always add a little bit of salt because it really brings up the sweet flavors.
4- Add the evaporated milk. If you dont have evaporated milk just replace it with regular milk.
5- Add the sweetened condensed milk and the regular milk.
6- Blend all the ingredients together.
7- Prepare for the next steps by getting some water boiling and preparing the caramel.

Step 2: Making the Caramel
1- Preheat oven to 350 F / 180 C.
2- Boil water (we will use it later when baking the flan)
3- Pour the sugar in a skillet and cook on medium-high heat. Keep stirring the sugar constantly. At one point the sugar becomes hard – don’t worry about it, it will eventually melt.
4- After a few minutes, all the sugar melts into a golden brown liquid. Continue stirring and cooking until the sugar is completely dissolved and you get a nice golden brown caramel. Make sure not to overcook, otherwise the caramel would burn.
5- Pour the caramel in a baking pan (I am using an 8.5 inches rectangular pan) and make sure that the caramel covers all the bottom surface of the pan.

Step 3: Baking the Flan
1- Using a spoon, remove the top foam (if any) that formed when blending the flan ingredients. Then stir the flan mixture just before pouring it into the baking pan.
2- It’s time to bake the flan. Make sure that your oven is preheated to 350 F / 180 C.
3- Place the baking pan containing the flan mixture into a larger baking pan. We going to pour boiling water in the larger baking pan and the boiling water will surround the pan containing the flan.
4- First place the large pan (containing the smaller flan pan) in the oven rack, then pour the boiling water until the water reaches half the height of the flan pan. It’s much easier to do it this way than moving the pans around when water is in.
5- Bake the flan for around 1 hour.
6- When ready, the flan will have a beautiful golden color at the top. The flan is still jiggly but if you insert a knife in the center, it comes out clean. That’s how you know the flan is ready.
7- Remove the flan pan from the water bath, place it in your counter for 1 hour to cool down.
8- Then place the flan pan in the fridge for at least 4 hours before serving the flan.
9- Once the flan is cold, run a sharp knife all around the edges, to make sure that the flan edges are not sticking to the pan.
10- Place a place on top of the pan, flip, then give it a shake.
11- Slowly remove the pan and you will have your flan beautifully displayed on your plate!