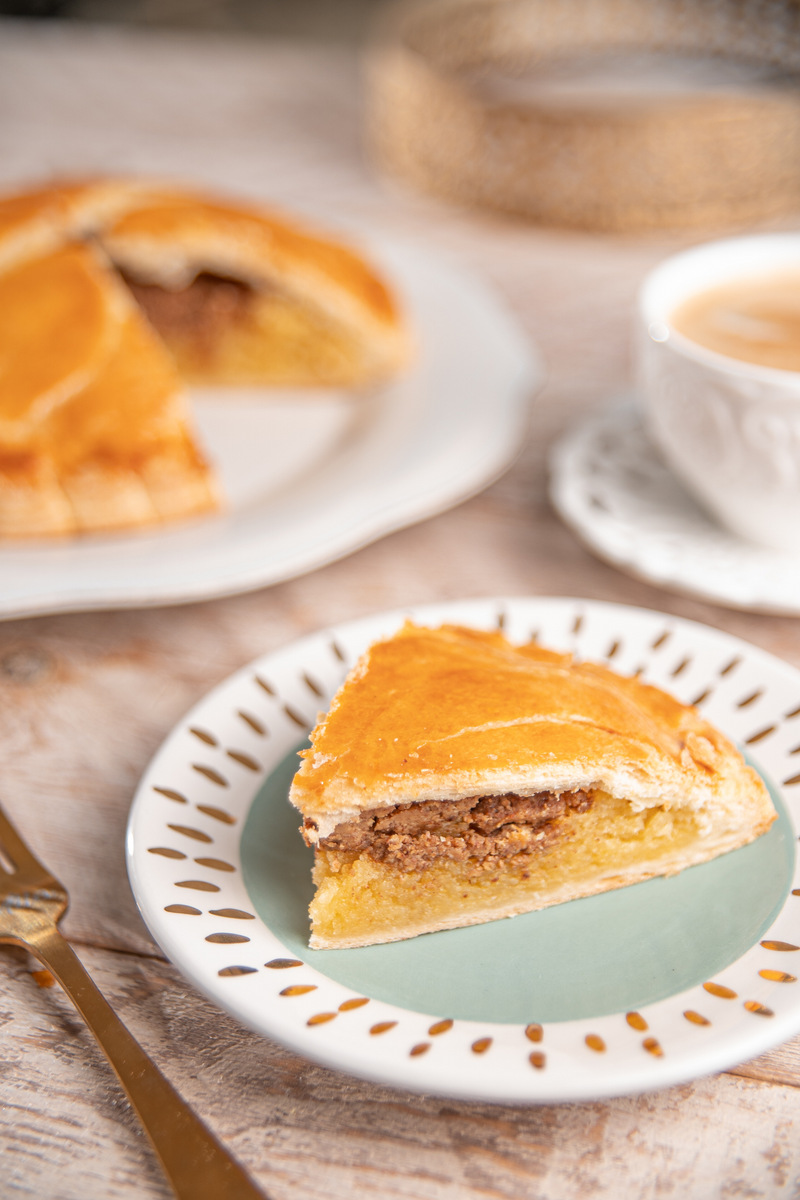 Step 1: Preparing the almond cream
1- In a large bowl, add the softened butter, powdered sugar, almond powder, cornstarch, eggs, and vanilla extract.
2- Mix all the ingredients together using a whisk until well combined and the cream is homogeneous. Set aside in the fridge and allow to cool for at least 1 hour.

Step 2: Assembling
3- On a floured working surface, and using a rolling pin, spread the puff pastry until it is 1.5 mm thick.
4- Using 2 round cookie cutters (or round plates), one of 24 cm and one of 26 cm, cut the puff pastry into two circles. The top one should be slightly larger to make the assembling easier.
5- Place the puff pastry circle of 24 cm on a baking sheet covered with parchment paper, brush the edges with water and evenly spread the almond cream in the center. Make sure to leave 3 cm between the edges and the cream.
6- Top the almond cream with a layer of amlou, place a small bean within the cream, then cover the filling with the second puff pastry circle. Gently press the edges to assemble the circles together and also to avoid possible leaks during cooking.
7- In a small bowl, whisk together the egg yolk and milk until homogeneous.
8- Evenly brush the entire surface of the Galette des Rois and place it in the fridge for at least 30 minutes.
9- Brush the Galette des Rois a second time with egg yolk mixture, then use the back of a knife very carefully, to trace the decorations of your choice on top. Make sure to make a small hole on top in the center of the Galette so that the cream can “breath” during cooking time and not make the galette explode.
10- Place the Galette des Rois in a preheated oven at 180°C (365°F) and bake for 30 minutes until golden brown. Allow to cool on a rack. Serve warm.