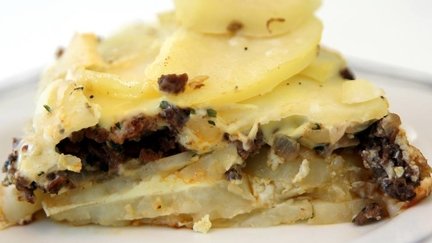 Step 1: Preparing the Meat
1- Place the ground meat in a large bowl.
2- Add the spices to the meat (paprika, ground cumin, ground cinnamon, salt, and hot chili pepper).
3- Add the finely chopped parsley and cilantro to the meat.
4- Using your hand, mix the meat with the spices and herbs until well incorporated.
5- Cover the bowl with a plastic wrap, and place it in the fridge while preparing the potatoes
Step 2: Preparing the Potatoes
1- To avoid extra dishes, place a large pot filled with water next to your cutting board so you can place the cut potatoes directly in there.
2- Add a large pinch of salt to the water in the pot.
3- Peel the potatoes and thinly slice them (not too thin).
4- Place the potato slices directly in the pot with water.
Step 3: Cooking the Ingredients
1- Place the pot with water and potatoes on high heat, cover it, and boil the potatoes for around 20 minutes until they become soft.
2- While the potatoes are cooking, let’s cook the meat. In a flat pan on medium heat, drizzle the olive oil and add the finely chopped onion. Add a little bit of salt and cook for a few minutes until the onion becomes translucent.
3- Once the onions are cooked a bit, add the ground meat. Break the meat with a wooden spoon, mix with the onion, and cook for 5-10 minutes until the meat changes color from pink to brown. Do not overcook the meat otherwise it will become tough. Stop cooking when the meat changes color.
4- Check on the potatoes, they should be soft but while maintaining their shape. If you pick a potato slice with a fork, the fork should go through but the slice should not fall apart. If ready, drain the potatoes from the water.
Step 4: Making the Egg Mixture
1- In a bowl, using a fork, mix the eggs with milk, heavy cream, pepper, salt, and a little bit of nutmeg (to taste).
Step 5: Baking the Gratin
1- You need a baking pan, I am using a 9inch circular pan.
2- First start with a layer of potatoes.
3- Second cover the potatoes with the ground meat.
4- If you do not have grated cheese, you can use cheese slices (the cheap ones). If you do, then put them over the meat so the cheese is inside the gratin and not at the top.
5- Cover the meat (and cheese) with another layer of potato slices.
6- if you have the expensive grated cheese then top the potatoe layer with grated cheese, otherwise, skip this step.
7- Pour the egg mixture all over the gratin.
8- Bake the gratin in a preheated oven (360 F / 180 C) for around 20-25 minutes.
Serve hot!