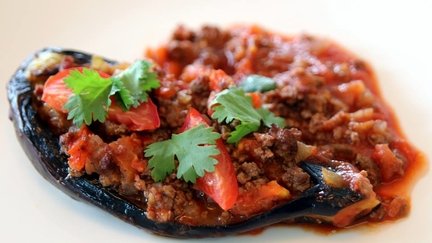 Step 1: Preparing the Ingredients
1- Finely chop the onions
2- Peel the tomatoes. Slice one and chop the other two.
3- Peel the eggplants using the ‘stripe’ technique (half peel skin, so you have one stripe of skin, and stripe peeled)
4- Place the eggplants in salty water (large bowl with a teaspoon of salt) and let them sit there while preparing the rest of ingredients – around 30 minutes.
5- Cut a slit in the center of the eggplants lengthwise, and scoop out the eggplant meat and seeds, to create a ‘boat’ shaped eggplant.
6- In a bowl, place the meat, add a little bit of olive oil, cumin, paprika, salt, and pepper. Mix well, cover and let it marinate in the fridge while frying the eggplants.

Step 2: Cooking the Ingredients
1- In a large pan, drizzle a little bit of olive oil and let it heat up on medium heat.
2- Once the oil is hot, place the eggplants in the pan and close with a lid. Fry on one side for 3 minutes, return to the other side, and cook for another 3 minutes.
3- Remove the eggplants from the pan and place them in a baking pan, cut face up (to fill it with the meat)
4- In the same frying pan, drizzle more olive oil, heat up on medium heat, and add the chopped onion. After a few minutes of cooking the onion, add the meat. Stir and cook until the meat changes color (to brown).
5- Add the chopped tomatoes to the meat and onions, a pinch of salt and 1/2 teaspoon paprika over the tomatoes, mix well and cook for 3 minutes.

Step 3: Stuffing the Eggplants
1- Using a spoon, put the meat mixture in the carved space of each eggplant. Also dont forget to add the sauce from the meat!
2- Using a spoon, add the tomatoe sauce arround and in between the eggplants in the baking pan.
3- Add the rest of the meat mixture on top of the tomato sauce so nothing gets wasted.
4- Add the tomato slices on top of each eggplant (decoration).
5- Bake in a pre-heated oven 360 F / 180 C for 25-30 minutes
6- Serve immediatley from the oven and decorate with cilantro leaves.
Bon Appetit!