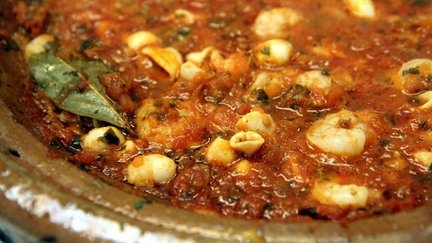 Step 1: Preparing the Ingredients
1. The hardest step in this tagine is just grating the tomatoes! Cut the tomatoes in half, using a grater (the big wholes), grate the tomato from the inside. Discard the skin.
NOTE: If you are using a tagine pot to cook make sure you use a grilling plate that you place between the store fire and the tagine bottom, to avoid burning the bottom of the tagine.
Step 2: Cooking the Tomato Sauce
1. On medium high heat, drizzle the olive oil on the tagine (or pot).
2. Once the oil heats up, add the grated tomatoes. Also, add a bay leaf (for an amazing flavor) and spices. For the spices, we are using paprika, salt, and pepper. Add the crushed garlic, the finely chopped cilantro and parsley, and finally my secret ingredient: harissa! Harissa is a North African spicy sauce, if you dont have it you can skip it, but if you have it definitely use it! Mix all the ingredients.
3. Cover the tagine, reduce the heat to medium, and let the tomatoes cook until they start boiling and the sauce becomes thicker. Check on the tomatoes and stir from time to time.
4. After 20 minutes of cooking the tomatoes, add the tomato paste and mix it in with the rest of the ingredients. Cover, and continue cooking the tomatoes. The total cooking time should be around 30 minutes.
5. After the tomatoes are cooked, check on the level of water. If the sauce is ‘watery’ (water is from the tomato juice), uncover the tagine, and let the sauce cook for around 5-10 minutes until the water evaporates and the tomato sauce becomes thicker. You may not need to do this step if your tomatoes are not as juicy.
Step 3: Cooking the Seafood
1. Once the tomato sauce becomes thick, add the seafood to the tagine. You can use shrimp only, or a seafood mix.
2. Cook on medium-high heat, uncovered.
3. The seafood is cooked as soon as the shrimp becomes pink and is not translucide anymore. It does not take much time to cook (5-8 minutes). Do not overcook it , or the seafood becomes chewy!
Serve immediately, hot, with crusty bread (French baguette or Moroccan bread)! Bon Appetit!