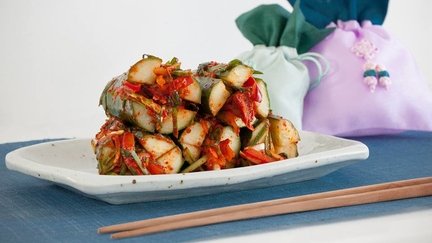 Step 2 – Preparing the Stuffing:
1-  While waiting for the cucumbers to brine, prepare the rest of the ingredients. Slice the chives into 3 cm / 1″ long pieces
2- Thinly slice the half onion. Cut the the half red bell pepper into thin sticks (Julienne).
3- Peel the carrot then grate it using the large holes of the grater.
4- Grate the garlic cloves and peeled fresh ginger using the small holes of the grater.
5- Place all these ingredients in one large bowl.

Step 3 – Marinating the Stuffing:
1- Add the Korean red chili flakes to the vegetables.
Note: if you dont have Korean red chili flakes, you can use a mix of paprika and cayenne pepper.
2- Add the sugar and fish sauce.
Note: if you dont have fish sauce, you can use a can of sardines in water. Puree a little bit of the sardine meat with the sauce in the can and use as a susbsitute.
3- Using plastic gloves, mix well the seasoning with the vegetables with your hands until all ingredients are well incorporated. Taste and adjust the seasoning accordingly.

Step 4 – Stuffing the Cucumbers:
1- Drain the cucumbers from the water.
2- Open each cucumber piece and stuff it with the seasoned vegetables.
3- Place the stuffed cucumbers in a container with a lid. Rub the surface of the cucumbers with the rest of the seasoned vegetables.
4- Place the stuffed cucumbers over your counter and let them ferment for at least 1 hour, preferable 3-5 hours to ferment.
5- Serve on a plate as a side dish!
Note: you can keep these cucumbers in the fridge for 2-3 days.