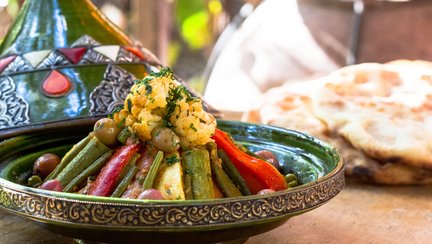 1- Prepare the vegetables:
Onion: finely chop
Tomato: peel, seed, and finely chop
Carrot: peel, cut in half, slice each half lengthwise, remove and discard the core, then slice each quarter into medium strips
Turnip: peel, slice in half lengthwise, then slice into medium strips
Potato: peel and cut into quarters
Zucchini: trim ends and cut into quarters
Red bell pepper: trim ends, seed, and slice into medium strips
Green beans: trim ends and cut into medium strips
2- To make the spice marinade, combine all the marinade ingredients in a bowl and mix well.
3- Place the chopped onion and tomato in the tagine plate. Add 2 tablespoons of the spice marinade, mix, cover the tagine and cook on medium heat for 5 minutes until the onion and tomato melt into a thick sauce.
4- Nicely display the vegetables in the tagine, starting with the vegetables that take the longest to cook (carrot, turnip, potato) then leaving at the top the ones that take less time to cook (zucchini, cauliflower, red bell pepper, green beans, and green peas).
5- Pour the spice marinade all over the vegetables.
6- Cover the tagine and cook on medium heat for 45 minutes. From time to time check on the vegetables to make sure that there is enough liquid in the tagine. Add water if necessary, but only small amounts at a time. Also, occasionally, take some of the sauce in the tagine and baste it over the vegetables so that those placed on top absorb the marinade flavors.
7- Serve hot with crusty bread.